Some info on the book

Tom is a successful author, but for the first time in his life, he has writer’s block.  His main distraction is an online admirer, Evie, who simply won’t leave him alone.  Evie is smart, well read and unstable; she lives with her sick father and her social media friendships are not only her escape, but everything she has.  When she’s hit with a restraining order, her world collapses, whilst Tom is free to live his life again, and to concentrate on writing. 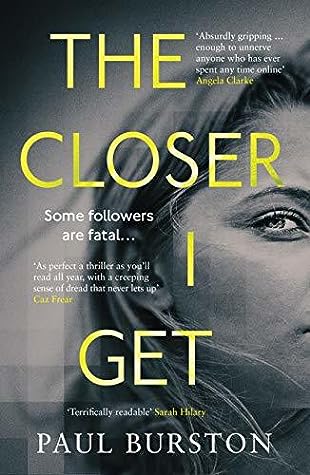 The author sets this story up nicely and as we get to know Tom and Evie the lines are drawn quickly – he is the hunted and she is the one hunting. But we can also see that there is more to Tom than meets the eye.  I loved trying to work him out!

This is what I’d call a compulsive read.  It’s very difficult to step away from and I think that’s due to the fact that the subject matter is relevant to today’s world. I wanted more and more. It made me take a step back and question my time on social media and how I interact with people as well who I’m interacting with.  I also had to ask myself how do I portray myself and what does the information I’m putting out there say to others.

The Closer I Get is hugely unsettling and is precisely what a psychological thriller should be in that it is full of tension, superb writing and plenty of alarm bells that are ringing out warnings constantly. If you listen hard enough I’m pretty sure they’re saying “DON’T POST THAT!”.

It’s very easy for any of us to hide behind a monitor or phone screen. It’s easy to hide behind a made-up profile name.  Trolls are part of everyday life online, unfortunately, and every now and then I do wonder who these people are and what their life consists of outside of their online presence.

Who is behind the profile pictures that smile back at us from the accounts we follow and those that follow us? We grow relationships with people online but do we stop to think if they really are who they portray themselves to be?  Do they ask themselves the same questions about us?  I’m often wary online but possibly not enough and I tend to take people at face value.  After reading this book there’s a very big chance I’ll ask more questions and be more mindful of my usage.

I could talk about social media all day.  I think it’s such an interesting subject and a great experiment in human nature, which lays out all of our flaws (and positive attributes) for precisely what they are.

This book is a perfect showcase of how people misinterpret the simplest of things over social media or in person. It’s such an easy thing to do and I think we’ve all come across different variations of it whether on Twitter or the comments section on an interview.

I read The Closer I Get in the form of an eBook on my phone. This isn’t the way I usually read books and I thought I’d find it quite difficult but it was the complete opposite. It allowed me more reading time than usual which is exactly what was needed for this book!

I received a copy of this book in return for an honest review and I would like to take this opportunity to thank Anne Cater, as well as Karen at Orenda Books

Some info on the author

Paul Burston is the author of five novels and the editor of two short story collections. His most recent novel The Black Path, was a WHSmith bestseller. His first novel, Shameless, was shortlisted for the State of Britain Award. His third novel, Lovers & Losers was shortlisted for a Stonewall Award. His fourth, The Gay Divorcee, was optioned for television. He was a founding editor of Attitude magazine and has written for many publications including Guardian, Independent, Time Out, The Times and Sunday Times. In March 2016, he was featured in the British Council’s #FiveFilms4Freedom Global List 2016, celebrating “33 visionary people who are promoting freedom, equality and LGBT rights around the world”. He is the founder and host of London’s award-winning LGBT+ literary salon Polari and founder and chair of The Polari First Book Prize for new writing and the newly announced Polari Prize.

Mother of Dragons, rugby coach and eternal dreamer. I love nothing more than being lost down the rabbit hole of books and my Kindle. With a pinch of empowerment, a teaspoon of solitude and the odd G&T I'm not shy of an opinion or letting you know what passions stir my mind! Musings of a binge reader. View more posts