The newspapers called it The Bad Place. A remote farm out on the Thames estuary, where six children were held captive for two weeks. Five of them got out alive.

That was twenty years ago. Now adults, they meet up annually to hold a candlelit vigil for their friend who died. The only rule is that no-one can talk about what happened the night they escaped. But at this year’s event, one of them witnesses a kidnapping. A young girl, Sammi, is bundled into a van in front of their eyes.

Is history repeating itself? Is one of them responsible? Or is someone sending them a twisted message?

DI Sasha Dawson, of Essex Police, is certain that the key to finding Sammi lies in finding out the truth about The Bad Place. But she also knows that with every second she spends trying to unlock the past, the clock ticks down for the missing girl. 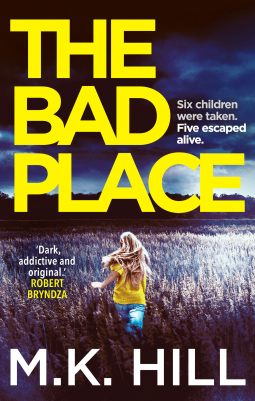 First thoughts?  Deep joy – it’s part one of a series!  For me, there is nothing worse than finishing a book and wishing there was more to come.  This time, there will be.

Sasha Dawson rocks!  Her home life is messy and chaotic and I just loved her.

The Bad Place is addictive and dark.  It is darker than I’d usually read but like I said above, I hoped for more once I reached the end so that alone speaks volumes.

The opening scenes of the first chapter set the storyline and you know straightaway all is not okay – even before DI Dawson makes her first appearance.

This book is out in September 2019, which thankfully isn’t that far away.  Keep note of the book as it’s definitely one for those who love mystery/thrillers.  You’ll be hearing lots about it, of that I’m sure.

Thanks so much to the lovely crew at Head of Zeus for my copy, via Netgalley, in return for an honest review.

Mother of Dragons, rugby coach and eternal dreamer. I love nothing more than being lost down the rabbit hole of books and my Kindle. With a pinch of empowerment, a teaspoon of solitude and the odd G&T I'm not shy of an opinion or letting you know what passions stir my mind! Musings of a binge reader. View more posts